Survey of motor activity, behavior, and forebrain morphometry in 21 inbred strains of mice across two laboratories   (2003)

Introduction: Comparative studies of behaviors and phenotypic characteristics on a wide range of inbred mice are based on the caveat that genetics play a major role, and that environmental influence may be significant, but controllable. To illustrate this, simultaneous studies of identical behavioral tests given under standardized conditions to identical strains in two different laboratories are expected to generate comparable results. Therefore, any difference in results, however subtle, implicates the inevitable variations in the research facility's environment. On the other hand, apparent robustness and replicability of the behavioral test results or phenotypic characteristics validate the genetic differences between inbred strains of mice.

Each mouse was tested for all procedures. Mice were not pretreated with drugs, special diet, or exposed to other environmental test conditions.

The apparatus is cleaned with tissue (Kimberly-Clark Kim-Wipes EXL #34256) moistened with Small Animal-S.O.X. (Hagen Inc. #H-30), and then allowed to dry completely.

Notes for all procedures in this project

Average distance traveled is calculated as = (total distances traveled (in cm) after 5 minutes) ÷ (number of trials (5)).

Purpose: To measure strain differences in locomotor activity, anxiety and exploratory behavior using the open field test, and assess the stability of behavioral differences among the strains in two laboratories.

Purpose: To measure strain differences in anxiety and exploratory behavior using the elevated plus maze, and to assess the replicability of observed strains differences in two laboratories. 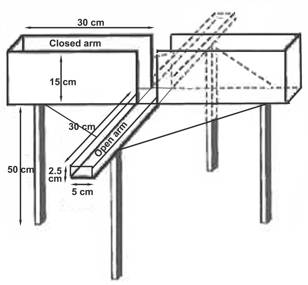 Environmental test conditions: The maze is located in a room where the surrounding visual cues are absent or at least comparable or symmetrical with regard to open versus closed arms. Lighting is provided by a frosted tungsten light bulb that is suspended at each corner of the frame with no more than 100 Lux.

Purpose: To investigate the replicability of brain morphometric measurements, such as brain weights, corpus callosum, hippocampus and anterior commisures sizes, across inbred strains of mice.

Each mouse was previously tested for all behavioral procedures.

I. Fixative and staining solutions preparation

a. CO2 gas applied at full concentration in chamber until all breathing stops for at least 1 min.

a. Before dissection, the mouse is weighed to an accuracy of 0.1 g.
b. Using sturdy dissecting scissors, cut the scalp up the middle from the nape of the neck to the nose. Then remove the muscle and membranous tissue from the posterior part of the skull over the cerebellum, using scissors and scraping with a scalpel blade. Note that this method does not require removing the head from the torso.
c. Using small but sturdy scissors, cut the skull on both sides from the foramen magnum to the olfactory bulbs and remove the flap of skull. This procedure can also be done with a pair of curved, pointed, toothless Dumont forceps. Be sure to keep the tips of the scissors or forceps away from the midline of the cerebellum and cerebral cortex.
d. Gently pry the brain from the skull, cut the trigeminal and optic nerves, and let the brain fall into a bottle of fixative at room temperature (at least 20 mL per brain); seal bottle and label with an assigned code so that "blind" measurements may be taken without revealing the identity of the animal.

Agitate gently once or twice within the first hour so that the brain changes position and the solution mixes well. Keep the bottle sealed tightly for at least 1 wk.

a. Remove the brain from the fixative with a spatula and trim away parts that are often damaged during extraction, including (i) the paraflocculi of the cerebellum, (ii) the optic nerves up to the optic chiasm, (iii) the olfactory bulbs in front of the cortex. Cut the spinal cord at the base of the medulla oblongata.
b. Blot the brain gently by rolling it on a non-porous plastic surface or counter top until no further drops of solution remain on the surface.

a. Place the brain in a plastic or metal weighing dish on the balance. Calculate weight to an accuracy of 1 mg.
b. Return brain to the fixative in the bottle.

a. Remove the brain from the fixative and place on a smooth surface, dorsal side up. The surface should have a straight edge guide for aligning the midline of the brain.
b. Use a fine razor blade or disposable microtome blade with a long, straight edge to cut the brain in half, starting at the longitudinal cerebral fissure and using one continuous motion from top to bottom. A blocking jig with guides perpendicular to the surface may aid in cutting. When the cut is correct, the base of the brain will be separated into two mirror-image parts. Then return the two halves to the fixative.

a. Half of the brain is rinsed in physiological saline at 24°C for a few seconds.
b. Rinsed brain is stained with the gold chloride in an incubator at 37°C for 1-2 h to reveal myelinated axons. Monitor the progress of the staining every 15 min and stop when the commissures appear clearly and have a brown or brownish-purple color. The stain will work at room temperature but requires more incubation time. Note that gold chloride stain can be reused until exhausted.
c. Stained brain is placed in fresh 2.5% sodium thiosulfate solution for about 5 min to stop the staining reaction and preserve the gold chloride stain.
d. Stained half brain is returned back in the fixative solution with the unstained half.

IX. Midsagital plane of stained half is viewed, digitally captured, and measured at the commisures.

a. Remove the stained half and place the flat surface against a microscope slide coverslip so that it adheres firmly by surface tension.
b. Invert the slide and support it with a 3.5 cm disposable petri dish so the brain does not touch the microscope stage. Adjust illumination to obtain a clear image through a stereoscope.
c. Capture the image with a video imaging system and save the image to a disk. Return stained half brain to fixative solution in the event measurements must be repeated.
d. Use an image analysis program such as ImageJ (NIH) to make measurements. Define an area of interest and use contrast enhancement to improve the image. Draw an outline of each commissure with the computer's mouse and find the area, and then draw a straight line between the two furthest points to find maximum length. When in doubt about the edge where the line should be drawn, look though the microscope.

Investigators Notes: Because certain fine distinctions must be made, it is advised to have the original stained brain available for reference via the stereoscope. When in doubt about the proper boundary of a structure, refer to the stereoscope image, which serves as the final authority. Be sure to make notes on any doubtful borders that may need to be rechecked. It is also helpful to refer to an authoritative atlas of the mouse brain; we use Sidman, Angevine and Taber Pierce (1971). The observer must be able to identify several structures that are commonly present at or near the midsagital plane. It may be helpful to examine some stained microscope slides in order to become familiar with the appearance of these structures.