a. Shortly upon arrival to the animal facility, the mice are sacrificed by trained personnel using CO2.
b. Before postmortem rigidity (rigor) occurs, body weight and maximum gape are measured.
c. To obtain maximum gape, the mice are positioned such that the jaws can be manually opened to their maximum capacity without excessive force using two pairs of sliding calipers (one is used to open the jaws and locked them in place, the other is used to measure gape). While the jaws are retracted, the maximum jaw gape is measured as the linear distance between the upper and lower incisors, see Figure 1 below.

Submitting Investigator's note: "This measure estimates the maximum structural capacity for jaw opening rather than a performance captured during a specific behavior (e.g., an activity with an explicit biological role)." 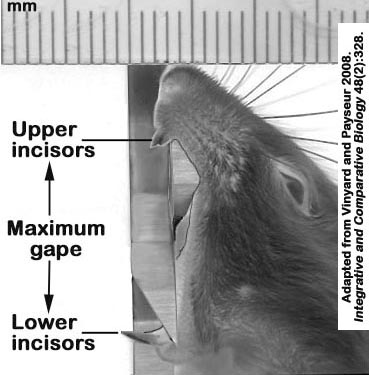 d. The skin and subcutaneous tissues are then undermined and removed using dissecting scissors. Under stereomicroscope the location of the masseter muscles in relation to the entire head is exposed and digitally photographed. In order to preserve metric accuracy, each photograph is calibrated with a ruler image when used in SigmaScan.
e. The position of the masseter muscles on the jaws, specifically the dorsal and ventral attachments of the superficial masseter and the locations of their insertions in the condyle, are digitally analyzed and quantified using SigmaScan Pro, see Vinyard and Payseur 2008, and Figure 2 below. These morphometric analyses can be done anytime, once the images are calibrated, captured, and stored into a computer for later retrieval. 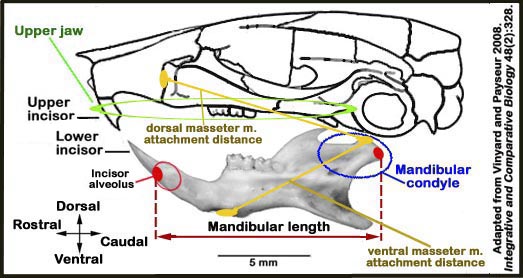 Figure 2. Medial-view photographic illustration of the right mandible relative to the position of the head. Note the extent of the upper jaw is demarcated in green, the lower jaw in red and the articular condyle in blue. The dorsal and ventral attachments (origin) and distances of the superficial masseter muscles to the condyle are drawn in yellow.

Figure 3. A. Skeletonized medial-view of the right mandible showing 1- 6 points of interest used for morphometric analyses. B. Closer view of the mandibular condyle and the different features of interests.