*All mice were subjected to all behavioral tests, and the order of the tests is identical for all mice. 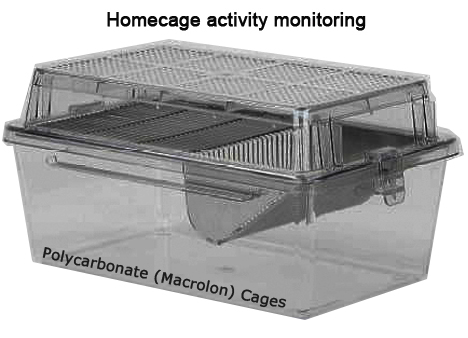 Fig. 1. An example of a Macrolon home cage. 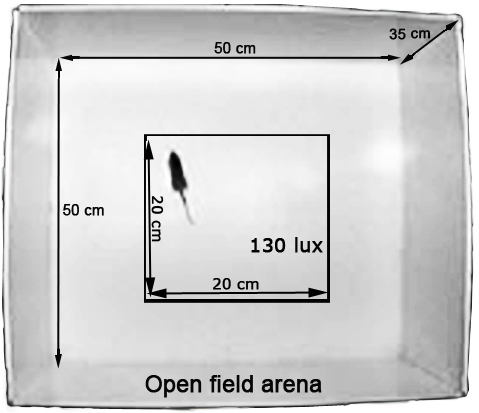 • Dark/light box: custom-built 25 x 30 x 30 cm Dark/Light box (TSE-Systems). The box is partitioned equally with an acrylic sheet 15 x 30 cm, such that approximately half (15 x 15 x 25 cm) of the total area is under low lighting (<10 lux) representing the dark compartment and the remaining half is brightly lit (320 lux) with white light, serving as the light compartment (Fig. 4). A small motorized black door opening within the partition allows mice to move freely between chambers. 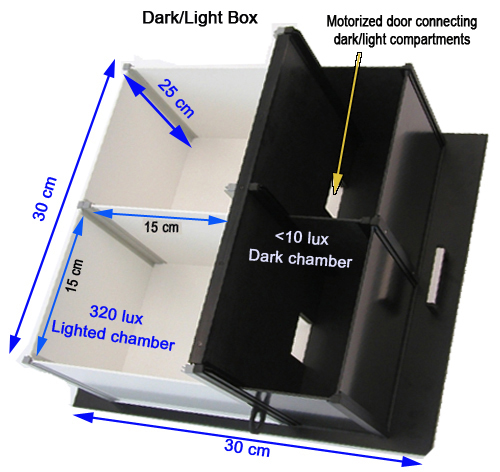 Fig. 4. Schematic of the Dark/light box showing brightly lit light compartment and the dark compartment, where the mouse is hiding.

• Elevated plus maze (Fig. 5): Constructed from black opaque acrylic, with each arm measuring 30 x 6 cm and the central platform 6 x 6 cm. One set of arms, opposing one another, are enclosed completely by a wall of transparent acrylic, 30 cm high, while the other set is open on either side of the arms (panels A and B). The maze is elevated 50 cm from the ground, illuminated with a single white fluorescent light bulb from above (130 lux), and equipped with video tracking system (EthoVision 3.0, Noldus Information Technology) (panel C).

Procedure for conducting a battery of behavioral tests

Below, days are numbered with respect to the first testing day.

Procedures common to all behavioral tests
a. Mice are habituated to the home cage and on 4 separate days presented a highly palatable snack (cream crackers) placed in a metal food cup.
b. The battery of behavioral tests is identical and conducted in order from the least to most stressful for all mice (see workflow above).
c. All tests are performed between 0800 and 1200 h.
d. Housing and testing rooms (4 m apart) are separated by 2 sound attenuating doors.
e. Mice are transferred one-at-a-time from the housing room to the testing room and immediately introduced to the test apparatus.
f. With the exception of daily training for the 5-CSRTT, the same experimenter is assigned to perform all tests.
g. Each apparatus is wiped clean between subjects to avoid olfactory cueing influencing activity and behavioral performances.

a. On days 4 and 11, mice are transferred to a novel clean cage (Fig. 2) with fresh bedding containing the metal cup with the familiar snack.
b. Latency to first touch the familiar metal cup and latency to start eating the familiar snack are both manually recorded.
c. Mean performance on both days is used for analysis.
d. Maximum time of 720 s (12 min) is assigned if a mouse fails to eat.
e. After testing, both nesting material and environmental enrichment tube are transferred to the novel cage, making it a new home cage.

a. On day 14, mice are placed into a corner of the white square of the open field arena illuminated with a single white fluorescent light bulb from above (130 lux) and exploration is tracked for 10 min (12.5 frames/s) (Fig. 3).
b. Number of entries into the center square area, and duration spent within are measured using EthoVision.
c. The Strategy for the Exploration of Exploration software (SEE) is used to smoothen path shape to calculate the total distance moved. SEE uses the distribution of speed peaks to parse the locomotor data into slow local movements (lingering episodes) and progression segments, which together constitute total distance traveled.
d. SEE is used to calculate the number of progression segments and the median duration of a lingering episode to describe the animal tendency to engage in exploratory behavior.
e. SEE is also used to calculate measures that describe the strategy of movement once exploration has been initiated: the median distance traveled per progression segment, the median duration of a progression segment, the number of stops per distance and the median acceleration during a progression.

a. On days 16 or 17, mice are introduced into the same closed arm of an EPM, facing the closed end of the arm (Fig. 5).
b. The EPM is illuminated with a single white fluorescent light bulb from above (130 lux) and exploratory behavior is video tracked for 5 min (12.5 frames/s).
c. The border between center and arm entries is defined at 2 cm into each arm.
d. Number of entries into the open arms, into the closed arms, onto the center platform, and time spent on the open arms are extrapolated from the video recordings.
e. Latency to explore is defined by the time between introduction onto the maze and the first appearance in the maze center.

1. Training phases 1-2 (first week) (Fig. 7) Mice are trained to perform the 5-CSRTT task on an individually paced schedule in operant chambers.
a. Mice previously food-restricted to gradually decrease their body weight to 90% of their free feeding weight are trained to perform the 5-CSRTT task.
b. Mice are habituated to the operant cages for one session of 20 min, during which the house light is switched OFF, and the stimulus lights in the magazine and stimulus holes are turned OFF.
c. On days 29-31, purified precision pellets (12 mg of Formula P) are distributed into the magazine at random fixed inter-trial intervals (ITI; 4, 8, 16 and 32 s), which coincide with switching ON the magazine stimulus light.
d. An ITI is only initiated when the previous pellet has been collected as indicated by a magazine response, during which the magazine stimulus light is turned OFF.
e. A session ends after 25 min or sooner when the criterion of 50 pellets is reached.
f. During the 3rd day session, the mean number of responses into the empty non-illuminated magazine is recorded for further analyses.
g. In subsequent sessions, a trial is started by the illumination of all 5 stimulus holes.
h. A response into any of the 5 illuminated holes switches OFF the light in all 5 stimulus holes, switches ON the stimulus light in the magazine, and delivers a food pellet into the magazine.
i. After the previous pellet is collected as indicated by a magazine response, an ITI is initiated and the magazine stimulus light is turned OFF.
j. Although each sessions lasts for 25 min or 60 earned food pellets, as soon as a mouse earns 50 or more pellets in two sessions, or after 17 sessions, it moves to the next phase.

Fig. 7. Schematic representation of the first week of 5-CSRTT training consisting of a habituation period and 4 magazine training sessions.

2. Training phase 3 (second week) (Fig. 8)
a. On days 35-38, mice are trained to perform an instrumental response into the stimulus holes to earn a reward.
b. Trials are started by the illumination of only one stimulus hole.
c.
Correct responses into illuminated holes earns a reward; responses into non-illuminated holes are without consequence.
d. As soon as mice earn 50 or more pellets in two sessions, or after 10 sessions, they are done with the training phase.

Fig. 8. Schematic representation of the second week of 5-CSRTT training to perform an instrumental response into the stimulus holes to earn a reward.

Fig. 9. Schematic workflow of the 5-CSRTT toward a fixed stimulus duration of 1 s, beginning with 16 s.

4. Five-choice serial reaction time tasks (5-CSRTT) with variable inter-trial intervals (Fig. 10)
a. On day 40, an inter-trial interval (ITI) is programmed to vary between three intervals (5, 7.5 and 12.5 s) during the last 10 sessions at fixed stimulus duration of 1 s, with each interval occurring an equal number of times for all mice.
b.
Latency to collect food reward is calculated and compared with baseline. 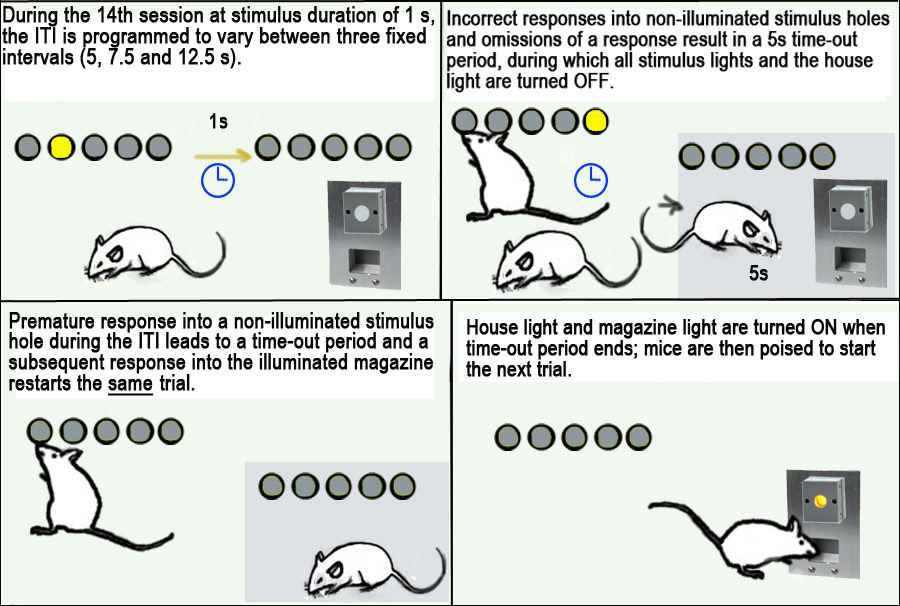 Data collected and submitted by investigator