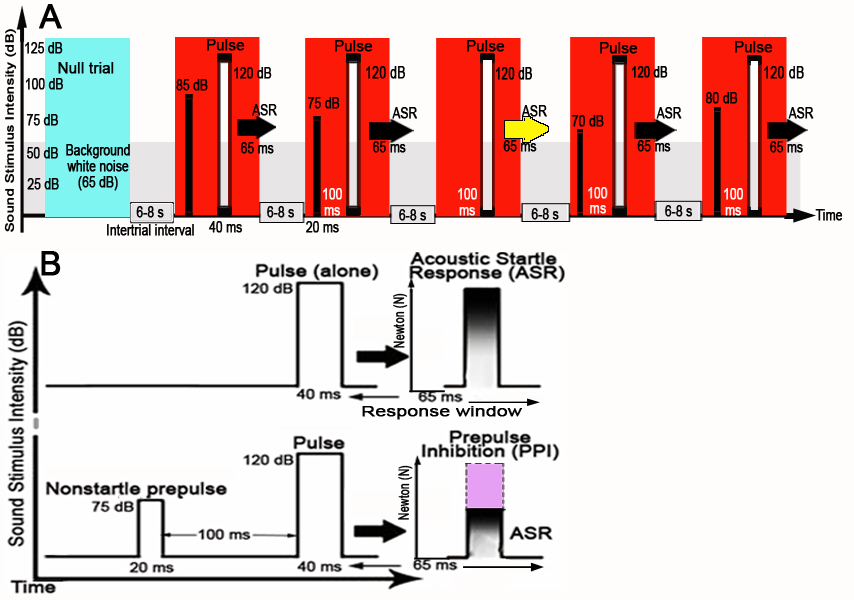 Figure 2. Photographic illustration of the StartleMonitor system chamber. Panel A shows the chamber in closed position. Panel B shows the chamber in open position showing the Startle Monitor System consisting of multiple PC-interfaced sound-attenuating startle chambers, computer interface chassis, and Windows-based software for data analysis. The startle chamber also consists of a speaker (diameter 11 cm) mounted on the top and a piezoelectric sensing platform on the floor. Mice are placed in an adjustable holder positioned on top of the sensing platform, providing limited restraint and ambulation.

Mice are brought to the testing room and allowed to acclimate for 1 h before testing.

a. Male mice, 7–9 wks of age, are tested between 10 am and 6 pm using a startle monitoring system.
b. Chromosome substitution strain (CSS) and C57BL/6J mice are tested during the same sessions to allow for within-session comparison of prepulse inhibition (PPI) levels. A total of 12–25 mice per CSS are tested over multiple test sessions (average 5.3 sessions for each CSS), and C57BL/6 mice are tested across all sessions.
c. Mice are habituated to the startle monitoring system 2 days prior to PPI testing by being placed in the monitor chamber for 3 min with a constant 65 decibel (dB) white noise background.
d. On day1 of testing, a 65-dB background white noise is maintained during the 3 min acclimatization period and then throughout the session the prepulse inhibition (PPI) testing is conducted.
e. During testing, mice are exposed to 6 replicate blocks of trials in pseudo-random order (see Figures 1A and 1B above). Each block consists of 1 pulse-alone trial of a 120 dB for 40 ms duration of white noise burst, 4 trials in which the pulse is preceded by 100 ms interval of a nonstartling prepulse of 70 dB, 75 dB, 80 dB or 85 dB intensities for 20 ms duration, and 1 null trial (no stimulus presented).

Submitting Investigator's Note: "We determined that these prepulse intensities do not themselves elicit a startle response in B6 mice (<2% of the startle elicited by a 120 dB pulse, data not shown)."

f. The intertrial interval is set from 6 to 8 s in pseudo-random order.
g. The maximum response in Newtons (N) within a 65-ms recording window (see Figure 1C above) is used as the startle amplitude. The startle reflex exhibits habituation, which is assessed by comparing the magnitude of four 120-dB pulse-alone trials presented at the beginning and end of the session, which are not utilized in PPI calculations.
h. The percent habituation is calculated as 100–[(mean startle block 2/mean startle block 1)× 100], where block 1 is the first four and block 2 is the last four pulse-alone trials. (see Martinez et al. 1999; Varty et al. 2000; Petryshen et al. 2005)
i. The mean startle amplitude of the 6 pulse-alone trials (see Figures 1A and 1B, 6 yellow arrows preceding white bars) is used to define the ASR.
j. Mice with negative PPI (i.e. higher startle following prepulse) at three or more prepulse intensities are excluded from the analyses.

Submitting Investigator's Note: "The total number of mice removed prior to analysis represented less than 1% of our total sample (3 out of 595 mice)."

k. For each prepulse intensity, the mean startle amplitude across the six replicate trials is calculated (see Figures 1A and 1B, ASR preceded by black arrows).
l. Prepulse inhibition is defined as the percent reduction in the ASR when preceded by the prepulse compared with the ASR alone using the formula 100 × [1–[mean startle amplitude with prepulse/ASR)]. Higher PPI therefore corresponds to greater reduction of the ASR by the prepulse.
m. Prepulse inhibition measures of each strain are determined for each of the four prepulse intensities (70, 75, 80 and 85 dB, see Figures 1A and 1B, black bars and arrows).
n. Activity within the startle monitors is assessed by the null trials (see Figures 1A and 1B, blue boxes) and is similar among all mice, indicating there are no effects of activity level on PPI.
o. After each testing session, the startle monitoring system is thoroughly cleaned with 70% ethanol and readied for the next mouse to be tested.

MPD Staff Notes: Since acoustic startle response is highly dependent on hearing ability, it is noteworthy that C57BL/6J strain is homozygous for Cdh23ahl (cadherin 23, otocadherin) on mouse chromosome 10. The age related hearing loss 1 (ahl) mutation, on C57BL/6J background results in progressive hearing loss with onset after 10 mo of age. Additionally, A/J is also homozygous for Cdh23ahl, which on A/J background results in progressive hearing loss with onset between 3 and 5 mo of age. While it is possible that mice from the C57BL/6J-Chr10A/J–CSS strain have the least ASR performance due to one of these hearing loss loci, mice were tested prior to the known onset of hearing loss for these loci.

Prepulse inhibition (PPI): An individual’s decrease in the acoustic startle response (ASR) to a loud noise (pulse) when the noise is preceded by a lower intensity noise (prepulse). Therefore, higher PPI corresponds to greater reduction of the ASR by the prepulse.