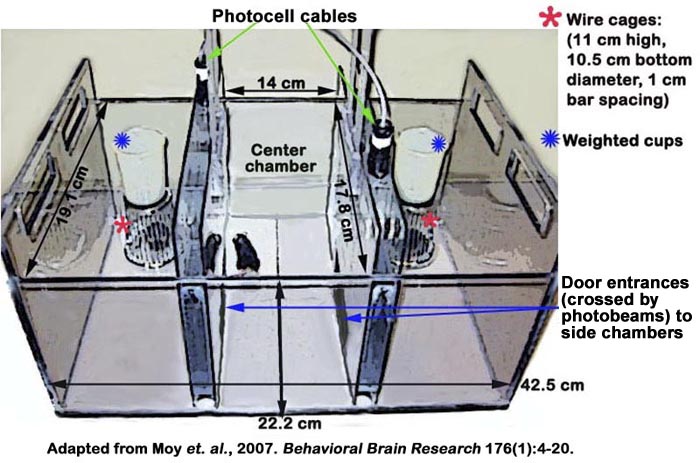 Testing is conducted during the light phase under fluorescent laboratory lighting (320-340 lx). Mice are transported from the vivarium into the test room and are allowed to acclimate for at least 30 min and habituate to testing conditions for 10 min.

II. Testing for sociability and preference for social novelty using social behavior apparatus
Habituation
a. An empty wire cage is placed within each of the side chamber, and a weighted cup is placed on top of it to prevent a mouse from climbing over the wire cage (see Figure 1).
b. With the doorways into the two side chambers opened, the test mouse is placed in the middle chamber and allowed to explore the apparatus for 10 min.
c. Embedded photocells within each doorway entrance are activated to automatically track the number of entries and duration spent in each chamber.
d. The sociability test is immediately conducted following the habituation phase.

Investigator's Notes: "To confirm the absence of a side preference bias for either of the two side chambers of the social test box, measures were taken of time spent in each side during the 10-min habituation period. None of the strains showed a significant preference for either the right or left side [no main effect of side; p > 0.05, within group repeated measures analysis for each strain]. In addition, separate groups of C57BL/6J mice were periodically evaluated in the social behavior task, to confirm that the environmental parameters for the assay had not changed and normal tendencies for social approach could still be observed. Stranger mice were adult male C57BL/6J (JAX®), and were housed in cages separate from and distant to the cages housing the subject mice, to avoid visual, auditory, and olfactory contact. Strangers have no previous physical contact with the subjects, and were kept in a separate location from the subjects on the day of testing. Several days before the start of social testing, the mice serving as strangers were habituated to the wire cages in the social apparatus for 5-10 min per day, for at least 5 days. Each stranger was used only once per day, and the strangers for the sociability test and the social novelty tests were taken from separate cages. Containing the stranger mouse in a wire cage served the purpose of preventing aggressive and sexual interactions, as well as ensuring that all social approach was initiated only by the subject mouse. Previous experiments indicated that the strain of the stranger did not change the social approach of the subject. The empty wire cage served as a control for the properties of the container, in addition to serving as the novel inanimate object with no social valence (see Moy et al. 2007)."

III. Sociability test
a. Shortly after the habituation period, the test mouse is enclosed in the center compartment of the social test box, and an unfamiliar mouse (stranger1; a C57BL/6J male) is enclosed in one of the wire cages and placed in one of the side chambers.
b. The location for stranger1 alternated between the left and right sides of the social test box across subjects.
c. Following placement of stranger 1, the doors are re-opened, and the mouse subject is again allowed to explore the entire social test box for another 10-min session.
d. Measurements are automatically recorded of the amount of time spent and the number of entries into each chamber by the automated testing system.
e. A human observer scored time spent sniffing each wire cage, using a computer keypad and customized software.

VI. Preference for social novelty test
a. Following the sociability test, each mouse is again tested in a third 10-min session to measure preference in spending time with a new stranger.
b. The test mouse is again briefly enclosed in the center compartment.
c. A new unfamiliar mouse (stranger2) is placed in the wire cage that had been empty during the previous 10-min session (sociability test).
d. The test mouse is given a choice between the first, already-investigated, now-familiar mouse (stranger1) and the novel unfamiliar mouse (stranger2).
e. As before, measurements are automatically recorded of the amount of time spent and the number of entries into each chamber by the automated testing system.
f. As above, a human observer scored time spent sniffing each wire cage in both side chambers, using a computer keypad and customized software.
g. At the end of each three-10 min sessions, the chambers are cleaned with water and paper towels before testing another mouse subject.
h. Each wire cage is used only once per day, and the three-chambered apparatus is cleaned and disinfected at the end of the day.

Using an automated social behavior test box, the following measurements were obtained: a, b, c or d: These measurements are similar measurements, but recorded under two distinct tests.