Workflow (the same set of mice were tested in Lake3) 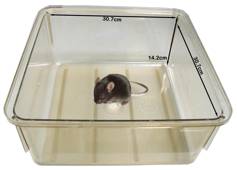 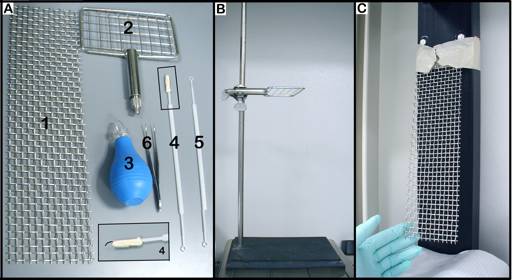 Mice are allowed to acclimate to animal room over the weekend.

• The SHIRPA primary behavioral screen provides a behavioral and functional profile by observational assessment of mice. (SHIRPA was first described by Rogers et al. (1977) and stands for: SmithKline Beecham, Harwell, Imperial College School of Medicine, Royal London Hospital, Phenotype, Assessment.) This screen has been modified and evaluates gait or posture, motor control and coordination, changes in excitability and aggression, salivation, lacrimation, piloerection, defecation, and muscle tone. All parameters are scored to enable comparison of results both over time and between different laboratories.

• Mice are assessed for various behaviors as described below in a view jar, observation arena, horizontal and vertical grids, as well as during tail suspension and supine restraint.

• All equipment is arranged in the same order for each test.

• The entire test area, including Arena, View Jar, and Grids are wiped down with ethanol and allowed to dry completely before the beginning of each test.

Tests performed in sequential order
a. A mouse is placed in the View Jar for 30s, and observed and scored for body position, spontaneous activity, tremor, twitches, defecation, and urination (see Figure 1, Table 1).
b. The mouse is then removed from View-Jar and placed in the viewing Arena by tipping the jar and allowing the mouse to drop into the wean cage.
c. While transferring, the mouse is evaluated and scored for transfer arousal. In the Arena, the mouse is evaluated for palpebral closing, piloerection, startle response, gait, pelvic elevation, tail elevation, hindlimb splay, touch escape, finger approach, positional passivity, defecation, and urination (see Figure 2, Table 2). A fear assessment is made based on the overall response in the arena. The mouse is then handled sequentially for eliciting a response (called positional passivity) while transferring to the next test.
d. Next, the mouse is suspended via its tail and moved from the Arena to the horizontal wire-grid.
e. While descending toward the grid, the mouse is evaluated and scored for visual placement (see Figure 3A, Table 3).
f. Once the mouse is has on all four limbs on the grid, it is evaluated for body tone, pinna reflex, corneal reflex, withdrawal reflex, and crossed extensor reflex (see Figure 3 A4, Table 3).
g. Subsequently, from a standing position the mouse is held by tail suspension for 15s.
h. While in mid-air the mouse is assessed for hind-limb splay, trunk-curl, and limb-grasp (see Table 4).
i. After being suspended the mouse is lowered via its tail again towards the horizontal wire-grid. Once the mouse has grasped the wire with its forelimbs (only) it is rotated horizontally by the tail.
j. The ability of the mouse to maneuver and to negotiate its position in the horizontal wire platform is scored based on hindlimb response (see Figure 3B, Table 5).
k. Next, the mouse is handled and placed in a supine restraint, along its cervical-thoracic dorsal skin and gently scuffed.
l. While securely restrained in a recumbent position, the mouse is further evaluated for skin color, limb tone, abdominal tone, lacrimation, salivation, biting, irritability, provoked biting, irritability, aggression, and vocalization (see Table 6).
m. The mouse is kept recumbent or in supine restraint for the examination of its righting reflex (see Table 7).
n. Then the mouse is placed on a vertical wire-grid with its head upward, then downward, and evaluated and scored for catalepsy and negative geotaxis (see Figure 3C, Table 8).
o. The mouse is returned to its home-cage.
p. All equipment is cleaned with ethanol and allowed to evaporate completely.