The open-field consists of a square arena (60 x 60 x 40 cm, l x w x h) made of white polyvinylchloride plastic board. The arena is lit by incandescent lighting placed 90 cm above the arena, such that the intensity of the light is 365 lux at the center of the arena. The open-field is surrounded by a black curtain except for one side from where the experimenter directly observed the animal’s behavior. For analyzing ambulation, the arena is equipped with a video camera placed over its center, and continuously record activity relayed via a video tracking system. 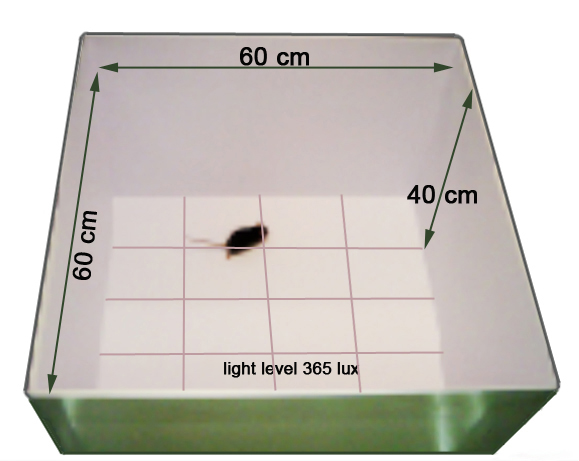 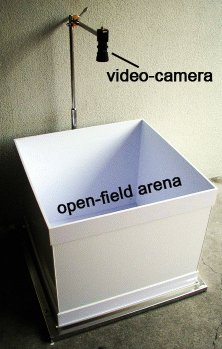 a. At least 1 h before the beginning of the test, mice are brought into the test room to acclimate them to the testing environment and minimize the effect of transfer.
b. The open field test is conducted during the light period (13:00– 17:00) 1-5 p.m.
c.

The arena is divided into 16 squares (4 x 4 cm), and the number of squares transited is counted as an ambulation or a transition by the computer software (Image OF). Transition/ambulation in the central area is similarly recorded.
d. Each mouse is then gently picked up by its tail with a tweezers and placed in a corner of the open-field arena.
e.

For each mouse the presence (1) and absence (0) of behavior and activity is directly observed and recorded in 5s interval for a 10 min trial using the multi-dimensional sampling method.
f. The following behavioral items are observed and recorded: sniffing, locomotion, stretch-attend, leaning, rearing, grooming, face-washing, digging, jumping, gnawing, freezing, pausing, central and total transitions. Video tracking system was used to detect central and total transitions.
g. At the end of each session, the number of defecation (fecal boli) and presence/absence (1=presence, 0=absence) of urination are recorded.
h. At the completion of each trial the arena is cleaned with a damp cloth.

• The number of central and total transitions

• The number of fecal boli

• The presence/absence of urination

Sniffing: sniffing the arena and air, identified by characteristic movements of nose and whiskers.

Locomotion: walking and running around the arena.

Leaning-against-wall (leaning): standing on the hindlimbs with the forelimbs against the wall.

Rearing: standing on the hindlimbs without touching the wall.

Grooming: licking and/or scratching its fur, licking its genitalia and tail.

Face-washing: scrubbing its face with the forelimbs, not followed by grooming.

Digging: trying to dig a hole in the arena or the corner of the wall.

Gnawing: gnawing mainly on the corner of the wall.

Pausing: a brief moment of inactivity.

Freezing: stationary state lasting more than 3 seconds regardless of posture.

Defecation: at the end of the sessions, the number of defecation is recorded.

Urination: at the end of the sessions, the presence or absence of urination is recorded.