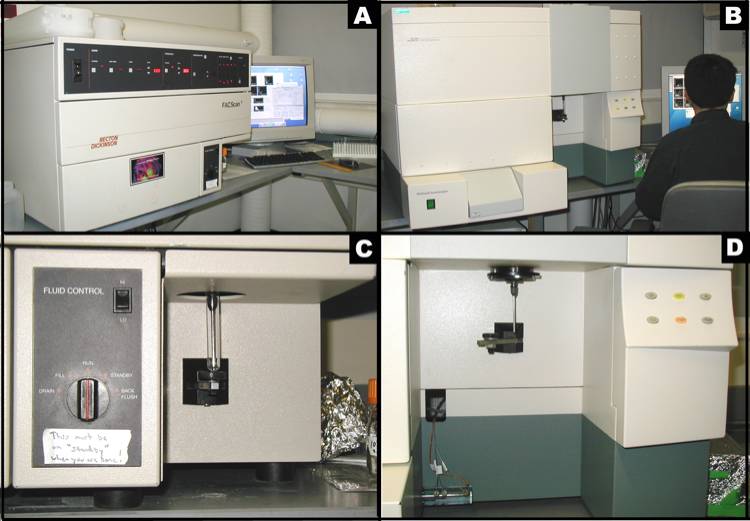 I. Harvesting spleen
a. Mice are weighed and bled for hematology (see Jaxpheno4), then immediately euthanized using CO2 asphyxiation or cervical dislocation.
b. Immediately after euthanasia mice are prepared for dissection and spleen removal and weighed using a Mettler-Toledo analytical balance.
c. A small midsection of the spleen is placed in a fresh Eppendorf tube with PBL FACS buffer and stored on ice until analyzed via Flow Cytometry.

II. Spleen preparation for Flow Cytometry
a. Spleen fragments from each mouse are gently mashed in 1 to 2 mL FACS Buffer and filtered through 70µm nytex nylon mesh.

Antibody cocktail for T and NK cells
• CD3e FITC clone 145-2C11 (The Jackson Laboratory (TJL))
• CD4 Cy3 Clone GK1.5 (The Jackson Laboratory (TJL))
• CD8 PE Clone 53-6.7 (BD or eBioscience)
• NKG2D APC clone CX5 (eBioscience)
• Cy3 has similar emission spectra as PE but is not optimally excited with a 488nm laser and thus is not as bright, therefore allowing both CD4 Cy3 and CD8 PE to be used in conjunction as shown below

b. All antibodies are titrated to determine optimal staining levels with minimum background staining.
c. Diluted antibody cocktail (10µL) is added to each pre-labeled tube.
d. Cells are stained for 30 min at 4°C.
e. Cells are washed with 2mL of FACS Buffer and centrifuged at 500xg for 5 min.
f. Supernatants are decanted and cells re-suspended in the residual buffer left in the tubes.
g. 200µL additional FACS Buffer is added to each tube followed by 10µL of a 20µg/mL Propidium iodide solution for dead cell exclusion.

IV. Splenocytes cell counts acquisition
a. Samples are acquired on a BD FACScan (with Cytek 5 color upgrade) cytometer (see Figure A and C above) or BD FACSCalibur (see Figures B and D above) and at least 20,000 live events are collected according to manufacturer's protocol.

Cautionary Note:  The specified monoclonal antibody clones used in this study have not been tested on all strains. It is possible the antibodies do not recognize all isotypes of the marker. Thus low cell numbers for a population might not be a good reflection of the actual count.

V. Analysis of splenocytes counts
a. Acquired cell count files are analyzed with FlowJo software (Treestar.com).
b. Viable cells are gated by forward scatter (FSC) and exclusion of propidium iodide as shown below.
c. Red blood cells are also excluded as they have lower FSC than lymphocytes.

Note that NKG2D is not a particularly bright antigen, thus it is not always easy to identify these cells. This marker does appear to be coexpressed on NK1.1+ cells in those strains that express NK1.1. 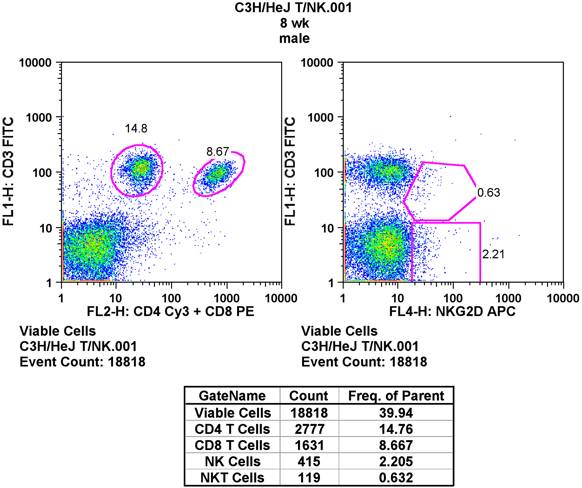 i. The percentage of each population of viable cells is reported.

Note: the percent of viable cells of total is not the same as % cell viability, as the total includes red cells and debris in addition to dead cells.